The Statue of Unity is a statue of Indian statesman and founding father, Sardar Vallabhbhai Patel. The statue is located at Sadhu Bet in the river Narmada and is surrounded by the Satpura and Vindhyachal ranges. One can find the Sardar Sarovar dam nearby.

Who is Sardar Vallabhai Patel? 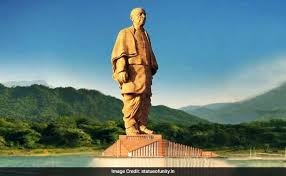 Born in Gujarat on 31 October 1875 and popularly known as the Iron Man of India, Sardar Vallabhai Patel served as the First Deputy Prime Minister of India apart from being a Indian barrister and statesman, a senior leader of the Indian National Congress and a founding father of the Republic of India. He played a leading role in the country’s struggle for independence and guided its integration into a united, independent nation. He is called “Sardar” which means “chief”.

The Statue of Unity was built in his name as he integrated British colonial provinces and princely states under the newly independent nation, India. He threatened military force and persuaded almost every princely state to accede to India. He had an inflexible commitment to national integration. He stood for national unity and that is why the Statue of Unity is dedicated to him. He was a considered by the Congress a great executive, organizer and leader and was voted as the president and consequently the first Prime Minister of India, However, it didn’t happen. The First Prime Minister of India was Jawaharlal Nehru.

Sardar Vallabhai Patel passed away on 15 December 1950 in Bombay due to a massive heart attack. His legacy however remains immortal.

Currently, The Statue of Unity is the world’s largest statue at the height of 182 metres (597 feet). The statue and related structures are spread over 20000 square meters. On 31st October 2018, it was inaugurated by our Honourable Prime Minister Shri Narendra Modi. The project was announced in the year 2010 first. Now it is the tallest statue in the world. A wonderful tribute to the Iron Man of India, Sardar Vallabhai Patel. The Statue of Unity.